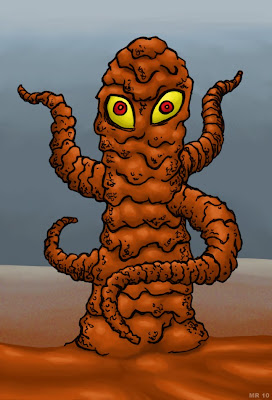 Tentacled creatures which live in deep mud pits. Mud ropers tend to hide themselves completely, with only their eyes exposed as they await prey. They are generally feared by humans and large pogroms have been undertaken to wipe them out. They have been known to work in tandem to bring down large animals, and also show other signs of an organized society, such as division of labor, social rules, and a hierarchical structure.
Posted by Hawanja at 9:22 AM