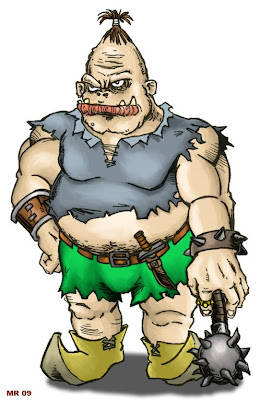 Goons are the unfortunate result of a coupling between an Ogre and an ordinary human being. They are smaller and smarter than their giant relatives, but no less ugly. Despite this their intelligence as a whole falls somewhere below the normal human curve. They can be found in both human and Ogre societies but are usually outcasts in both, as they tend to be picked on as "runts" by the Ogres, and likewise feared for their appearance and great strength by normal humans. They usually find employment as guards and enforcers for noblemen, crime bosses, or other powerful individuals.
Posted by Hawanja at 11:35 AM