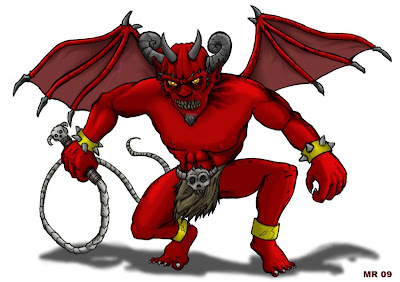 Demons are universal in all cultures and come in many shapes and sizes. In earlier western pagan religions they were seen as agents or messengers of the Gods, and were generally blamed as the causes of accidents, diseases, famines, etc. In later monotheistic religions demons are a convenient scapegoat for the existence of evil, and thus became the enemies of heaven and punishers of mankind. Eastern religions such as Hinduism have a slightly different outlook on demonic entities, while they are still generally "evil," they are depicted as also caught up in the same karmic struggle as ordinary humans are, with their evil as a result of such negative choices.
Posted by Hawanja at 8:05 AM