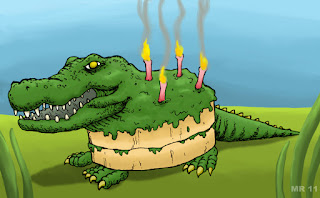 Strange mutations which have recently begun appearing in the rivers and waterways next to a large industrial bakery. Unlike normal alligators, the weird creatures live on land, and only venture into the water to feed. The method by which the candles on their backs re-ignite themselves is unknown.

The sudden appearance of these monstrosities have prompted investigations from several branches of law enforcement due to possible illegal dumping of toxic chemicals or waste, however as of yet no indictments have been made.
Posted by Hawanja at 9:58 AM