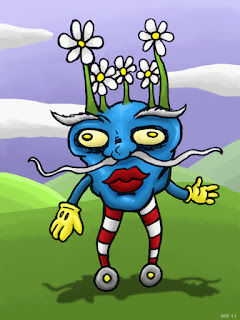 Dr. Phinneas Q. Crumpus was a revolutionary genius in the field of recombinant DNA. Crumpus made a big name for himself performing custom DNA work for famous celebrities, implanting body-altering features such as wings, fur, extra eyes, scales, etc. As the money and power went to his head the good doctor became more and more eccentric, and began performing risky proof-of-concept experiments on himself. After hundreds of different extreme  recombinant DNA modifications, Crapmus is now barley recognizable as human.