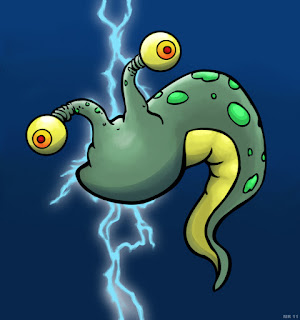 The enigmatic creatures known as "Thunder Slugs" began as a group of normal garden slugs which were on the receiving end of a bizarre series of lightning strikes. Instead of frying them into little charred husks, the small mollusks were somehow able to absorb the electrical energy, due to a mutation triggered exposure to a new type of insecticide. Their newfound powers gave the slugs the ability to channels electricity for a variety of effects, including flight and defensive electrical discharges.

Thunder slugs usually follow major storm systems, where they can often be seen "riding" thunderclouds.
Posted by Hawanja at 7:18 PM