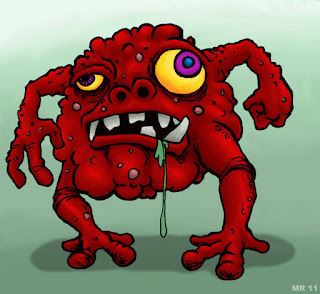 The Grunx are a race descended from the rejects discarded from a group of genetic experiments. Centuries ago travelers from beyond the stars came to the Grunx homeworld and performed a series of experiments on the local animal populations, which gave rise to several different classes of sentient species. The rejected specimens however were left in the wild to die. Over time however enough survived and eventually became a sub-race in their own right. The Grunx are usually sickly, and are often born with crippling genetic abnormalities. They tend to be highly xenophobic and war-like.
Posted by Hawanja at 10:51 PM