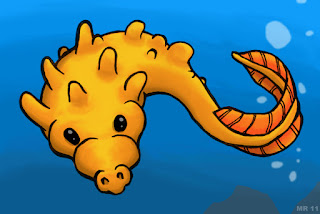 Psipox is an entity that conforms to no known evolutionary biology, and only follows existing taxidermy in a general sense. The creatures begin life in a large, blob-like group organism, and are birthed though a budding process, similar to the splitting of amoeba or bacteria.They then spend a number of years in a formless state, absorbing nutrients and minerals. Eventually the creatures will adapt external appendages or organs to allow it to transverse it's environment, i.e. arms, legs, eyes, paddles, fins, etc. However no actual internal organs or systems are developed. Psipox have been observed in a large number of environments with a large number of adaptive features.
Posted by Hawanja at 11:16 AM