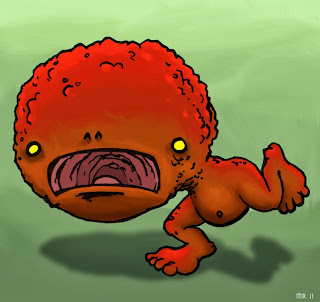 The Glibblagh are a strange race, often described as "hyperactive wadded up meat-balls with legs." They are generally known for having no sense of proportion, as they tend to overreact at the slightest hint of trouble. Glibblagh are creatures of extremes, who don't know the meaning of subtly or moderation.
Posted by Hawanja at 8:31 PM