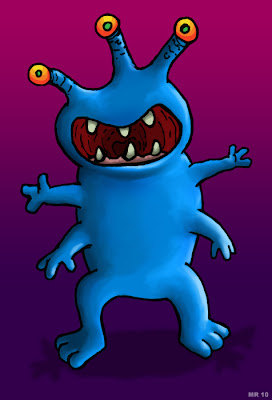 Flugwurts are an extremely mirthful race. As a people they had long ago abandoned organized warfare. Disputes on their planet are resolved in a "war" of extremely elaborate practical jokes, where leaders of individual nation states repeatedly attempt to outdo each other. Limits had to be imposed after the prime minister of one impoverished nation nearly created ecological chaos when he attempted to harvest the polar ice caps to create a gargantuan banana cream pie, the impact of which would have thrown the planet off it's orbit. Thus a historic treaty limiting J.O.M.D. (jokes of mass destruction) was enacted. Flugwurts tend to find employment as actors, joke writers, talk show hosts, and stand up comedians.
Posted by Hawanja at 9:22 AM