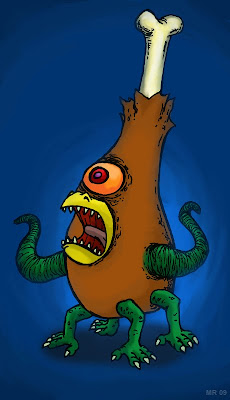 The freakish monstrosity that would be known as the Gobbletor began as an experiment by a less than ethical turkey farm to increase profits. Plucked and dressed turkeys were exposed to exotic forms of radiation that increased their size. Soon six foot drumsticks and fifteen foot turkey breasts were produced. However when one of the drumsticks was cooked strange mutations began to occur, and the Gobbletor was born. It quickly escaped from the lab, leaving a trail of carnage in it's wake, and has since gone on to become an urban legend. Gobbletor is frequently sighted in remote wooded areas, and is currently the subject of several documentaries.
Posted by Hawanja at 10:08 AM