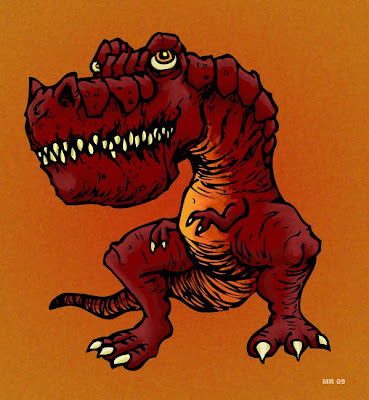 After the Phollywog debacle, the Toywerks toy company found itself on the edge of destitution. The decision was made to put nearly all of the remaining capital into another designer pet initiative. Thus was born the Designer Rex, a miniature dinosaur created from cloned T-Rex DNA. The creature was genetically manipulated to severely stunt the growth cycle, trapping the T-Rex in a juvenile, midget-like state. However, this did nothing to prevent the creature's natural hunting tendencies. The Designer Rex was initially a huge success, however a large public outcry following the severe mauling deaths of several children lead to their eventual outlawing. Designer Rex is still sold overseas, and to various companies to be used as guard dogs.
Posted by Hawanja at 11:39 AM