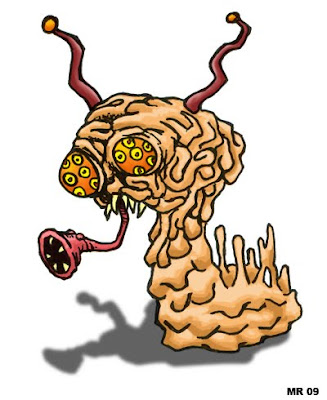 These hideous, slimy things just appeared one day from out of nowhere. There is nothing in the fossil record of such a creature and no mention of anything resembling them in recorded history. Yet suddenly they seemed to have appeared in and around major population centers overnight for no discernible reason. The "Brain Slug" is named so for it's wrinkly appearance, however the actual creature is not very intelligent. They are voracious eaters but so far seemed to limit themselves to consuming garbage and waste products, although there are rumors of "packs" of the slow moving creatures attacking homeless in parks and sewers.
Posted by Hawanja at 6:59 AM