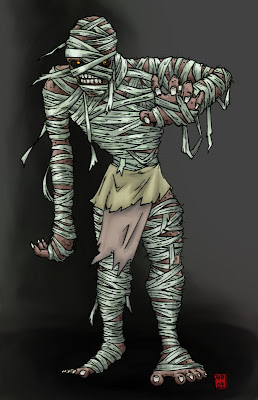 Mummies are the ritualistically preserved remains of the dead, the most famous of which come from ancient Egypt, however cultures in Asia and the Pre-Colombian Americas produced mummies as well. They are usually the remains of important people (Pharaohs, kings, emperors, etc.) and generally are attached to some sort of curse involving the theft of grave goods. Mummies are traditionally vulnerable to fire.
Posted by Hawanja at 11:48 AM