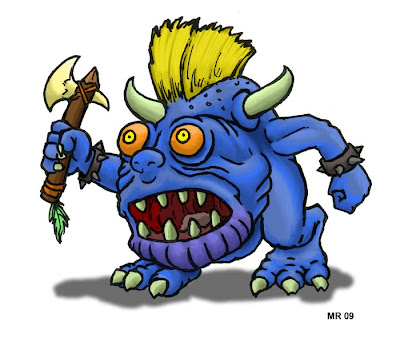 The Mugulites are a tribe of primitives that live in a deep subterranean realm of vast caverns. They have short, squat bodies, with the face occupying all of the torso. Their eyes are especially adapted to low light, as the only light sources are open rivers of magma and caverns of phosphorescent algae. They have developed a loose hunter-gatherer culture with a language based on grunts and growls. They will occasionally make raids to the surface to procure certian materials such as wood, they never tarry long as the open air and sunlight makes them uncomfortable.
Posted by Hawanja at 8:46 AM