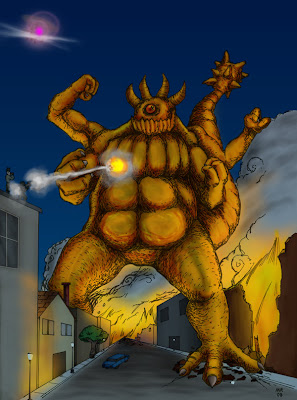 Icronus is a member of a peaceful space faring race. Unfortunately his ship malfunctioned and crash landed deep in the Amazon jungle. During the impact Icronus suffered a massive cerebral hemorrhage and awoke with severe brain damage. Furthermore the impurities in Earth's atmosphere coupled with exposure to the esoteric radiation of his own starship drive further mutated his DNA, making him grow to a height twice the normal size for one of his race. A small side effect of this is now he is completely insane.

He is left now with only an extremely rudimentary intelligence, and is subject to act on base bodily desires such as hunger and fear without impulse. Somewhere in the back of his mind lie memories of a peaceful, idyllic world many many light years away, of creatures not unlike himself living in harmonious communal family warrens and exploring the deeper reaches of space, and sometimes in between clashes with the Earth's military forces and other giant monsters, the twisted thing may even feel a tinge of an emotion he can no longer understand.

For on some level the monstrosity known as Icronus knows he will never see such things again. Perhaps if he could get his head clear, but first the hunger calls....
Posted by Hawanja at 11:11 AM