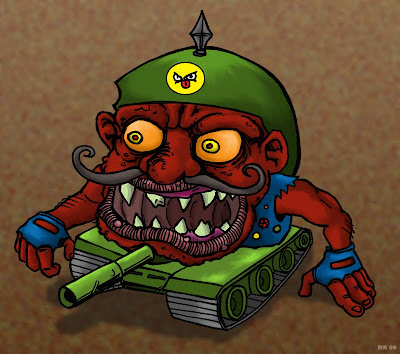 Behältergesicht is a heavy weapons expert for a group of interstellar mercenaries called the Paradroid Confederation. He joined the group already an old soldier, a mercenary veteran of several wars. A severe shuttle accident left him missing the lower half of his body, and thus he (along with several of his comerades) had his body surgically implanted with cybernetic parts. Behältergesicht tends to favor brute force for any situation, and usually gets in over his head.
Posted by Hawanja at 9:12 AM