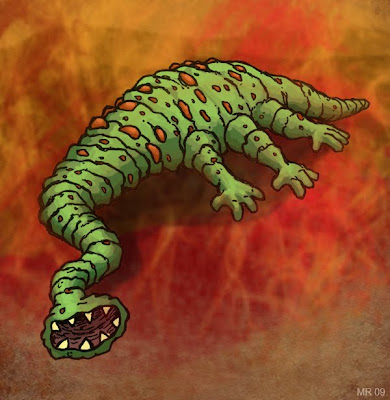 Large, caterpillar-like "grubs" which infest deep jungles, but have also been reported in sewer systems worldwide. In their juvenile state the Grubsucker will attach itself to a larger animal such as a rat or dog at the base of the neck. There it will feed for several months and grow larger, soon working it's way into the animal's skull where it feeds on the brain, of which it eventually bursts forth from in a gory fashion. Larger adult Grubsuckers reach a length of 2-4 feet, and will "suck" up small animals such as fish, rats, frogs, etc, although they have been known to attack larger prey as well.
Posted by Hawanja at 9:23 AM