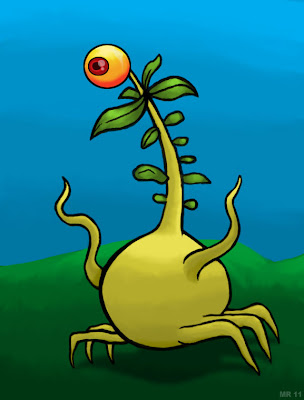 Mizzplits are small, scuttling creatures evolved from land dwelling plankton. They share characteristics of both animal and plants. Like plants they must have access to sufficient water and sunlight in order to produce food internally via photosynthesis. Their "root system" has been adapted into rudimentary legs, although the creature must remain rooted while feeding.
Mizzplits are considered an "emerging intelligence" and are thus isolated by most other races, although several populations have been discovered on other worlds. How these populations were transplanted remains a mystery.
Posted by Hawanja at 7:25 AM