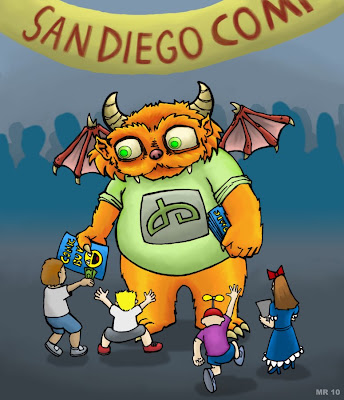 Larry is a monster, and like all good monsters he spent his time creeping up on children and scaring them from their closets or under their beds, and occasionally eating people or terrorizing teenage campers at abandoned summer camps. Being a terrible engine of destruction is hard work, and in his heart Larry always knew he wasn't cut out for it. Larry however always had a dream, to one day abandon the whole "hideous monster" gig and become a comic book artist.

Larry's monster friends laughed at his wild ambition. "You are a monster, Larry. Monsters are SUPPOSED to scare children, eat teenagers, bite the heads off of chickens, rampage through orphanages, and other assorted nasty things." Larry however was undaunted. He began to post his work online, and after a few years gained some recognition through sites like Deviantart. Eventually Larry began to self-publish and sell his work online and through 'cons. To Larry's great surprise his comics only sold more when people found out he really was a towering hideous creature Hell bent on destruction - at least that's the image his agent told him to cultivate. In real life Larry likes kittens.
Posted by Hawanja at 9:33 AM