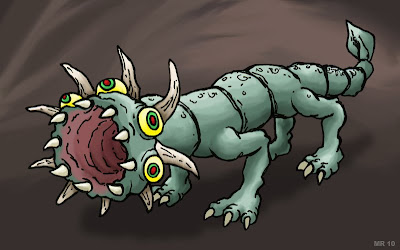 The SkuttleWurm is a mutated offshoot of a Pompeii deep sea worm (Alvinella pompejana.) In the late 1960's, large amounts of nuclear pollution was dumped into several deep sea trenches. The pollution mixed in with the heat and organic stew normally found in an deep sea vent environment. The resulting mutation is a 5-foot long mobile walking deep sea worm which is able to hunt on land for extensive periods of time.
Posted by Hawanja at 9:48 AM