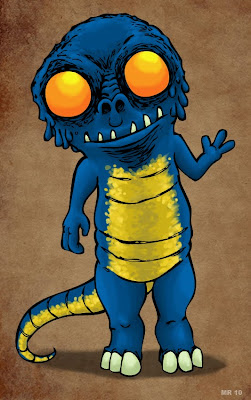 Big Eyes is one of the few ChemeMolls left. Like all of his kind, his large eyes allow him to see clearly in the dark jungle cover they call home. His was never a truly aggressive species. Over thousands of years as primates rose to dominance, the ChemeMoll tribe moved further and further inland, until all that was left of them was legend. They now number fewer than a thousand, and keep their hidden city a closely guarded secret.

A few of the younger ChemeMolls such as Big Eyes believe in making contact with the outside world, but so far have limited their activities to harmlessly observing human settlements.
Posted by Hawanja at 9:55 AM