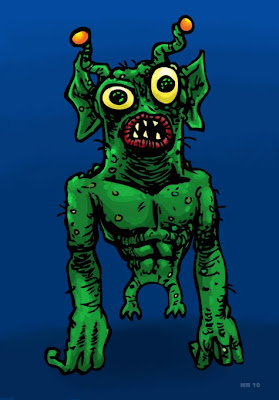 Groblins are mutated space goblins from another planet. Thousands of years ago, one enterprising goblin used dark science and arcane magics to construct a vehicle capable of space travel. He soon departed with several dozen of his kinsfolk, and was never heard from again...

A thousand years later, the same derelict spaceship crashed into the Earth. The ship itself had been reconstructed and added to almost to the point where it was unrecognizable. So too were it's inhabitants - the vile creatures subjected to a thousand years of inbreeding, crossbreeding with alien species, and mutation from cosmic rays. The Groblin horde (now numbering several thousand) used their advanced technology to immediately subjugate several different goblin tribes in the immediate area and set up an dystopian city state. They see themselves as superior to normal terrestrial goblins, and have visions of forming a vast interstellar empire.
Posted by Hawanja at 9:56 AM