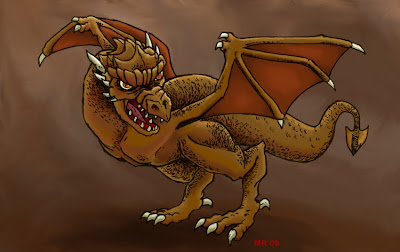 The Wyvren is a type of dragon, often found described in medieval bestiaries. It is depicted as a large beast, with two legs, wings with claws, a horned head, and a pointed spade on the tip of it's tail. The beast can be found in wells, ponds, lakes, caves, or damp forests. Wyvrens are said to attack males on sight, but will blush when confronted with a naked female (connected to the monster-abducts-maiden archetype?)

Cryptozoologists have theorized that the Wyvren may have originated from sightings of pterosaurs or other ancient flying reptiles.
Posted by Hawanja at 11:31 AM