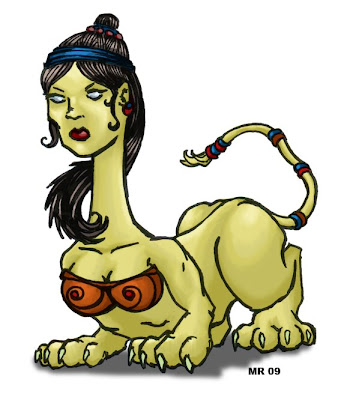 In Greek mythology, the Sphinx was a giant lion with a woman's head an breasts that guarded the entrance to the city of Thebes. She is also depicted with wings or a serpent's tail. Those who wished entry into Thebes would have to solve a riddle; Those who failed were devoured. The riddle was thus:

“Which creature in the morning goes on four legs, at mid-day on two, and in the evening upon three, and the more legs it has, the weaker it be?”

When the Greek hero Odepius answered the riddle correctly, the Spinx threw herself from a high rock and died.
Posted by Hawanja at 9:13 AM