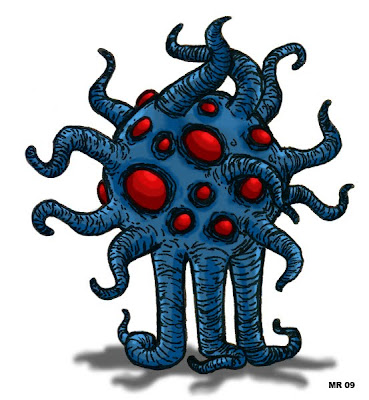 The Telpollyop is a species of strange, space borne fungus that originated from outside of our galaxy. They begin life as dormant spores which are blown along by solar winds. The spores then latch onto rocks or barren moons, and then enter a stationary barnacle-like stage, where they feed upon the minerals. Space faring races are well aware of the dangers of "space barnacles" growing on their hulls. Telpollyops can remain in this stage for thousands of years, and can grow incredibly large - some specimens have been observed to be half a mile or more.

During the final phases of it's life, the Telpollyop transforms again into a mobile, animal form. Individuals undergo ritualized combat for the rights to mate. Such combat has been known to decimate settlements (due to the size of the combatants.) After it's mating cycle is complete, the Telpollyop expires, then the reddish egg sacks rupture and launch the spores to begin the life cycle anew.
Posted by Hawanja at 11:09 AM