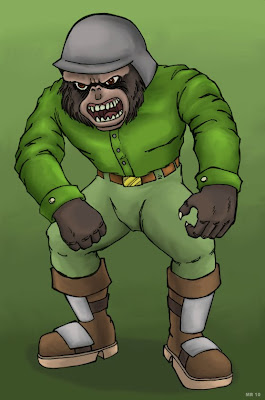 The New Delhi Monkey Man is described as a four foot tall humanoid monkey, that attacked people in the middle of the night, with glowing eyes and sharp claws. While the early incidents showed a fur covered creature similar to the Yeti or Bigfoot, later reports tell of the Monkey Man wearing a uniform and helmet. Theories of what the Monkey Man could be range all over the map, such as a cryptid, an avatar of the Hindu god Hanuman, an alien, or even an escaped government experiment.

Is the Monkey Man real? In all likelihood no. As time goes on the creature evolves from what could be a real animal to an urban legend-type character (such as Spring Heeled Jack.) The evolution of reports of the New Delhi Monkey Man read as a classic case study in mass hysteria.
Posted by Hawanja at 12:37 PM