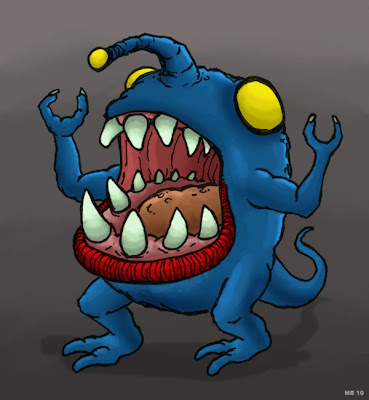 Lophamorites are strange, amphibious mutants, the result of splicing primate and Anglerfish DNA. Specimens quickly escaped into the wild and began breeding out of control, however after an extensive culling operation they have settled into an ecological niche. The creatures organize themselves into troops like chimps or baboons, with an alpha male at the head. During the spawning season males will fight for dominance, oftentimes to the death. Spawning with produce an abnormal amount of pups, most of which will be picked off by predators or cannibalized by older Lophamorites, although every few seasons systematic culling is reinstated to keep the population down.
Posted by Hawanja at 12:56 PM