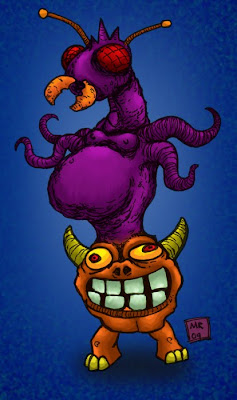 The bizarre mutation known as the Pynomula began life in a petri dish as part of a seventh grade student's science experiment. A mixture of processed animal proteins, salt, and water (i.e. bologna) and several different viruses (obtained from sick friends) were exposed to multiple different varying forms of electric shocks, then ejected into a squirrel zygote. The resulting mutation towered nine feet tall, with a large tentacled insectiod upper half and a bottom stout, smiling lower half. The Pynomula has two brains but share the same skeletal, cirulatory, and central nervous systems. Despite this the two halfs frequently seem to "argue" over which way to go.

The Pynomula won first prize.
Posted by Hawanja at 6:45 AM