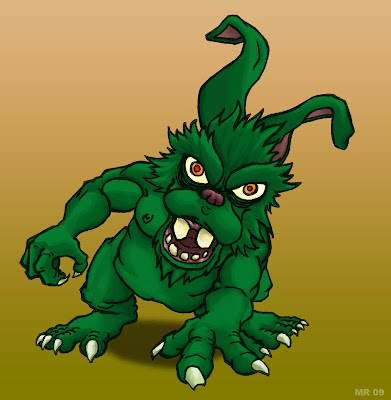 A massive, gigantic bunny rabbit infused by radiation during a gamma bomb test. Gamma Bunny has the strength of a thousand men, but the intelligence of a raging wild animal. He is incapable of any higher thought, and acts merely from base impulses - hunger, thirst, fatigue, and so on. It is thought that if a human being were to be exposed in a similar fashion he would retain some semblance of intelligence (although to a greatly reduced capacity.) Gamma Bunny seems to revert to normal bunny form whenever he is not in danger.
Posted by Hawanja at 9:07 AM