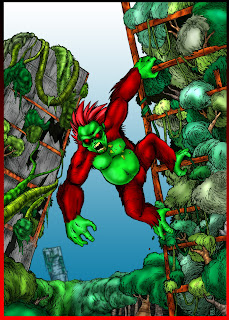 Chaos was a shaman-scientist who lived with his tribe before the cataclysm. He was transformed into his current state by accident, after infusing himself with DNA taken from Blizzard. Driven insane, he was forced to wallow in his own filth for eons, and now wants nothing more than to free himself from his curse.

Chaos is a character from the video game Primal Rage. (c) Atari games.
Posted by Hawanja at 7:43 AM