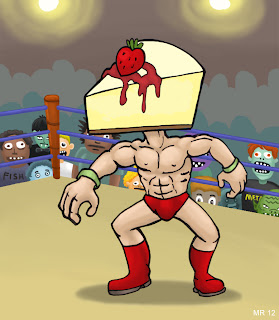 Jeremy Buttonwood was a lowly cab driver who lived an unassuming life. He found himself with a large piece of strawberry cheesecake for a head after eating an enchanted cheesecake left in his cab by a strange fare.

Endowed with superhuman strength, Jeremy renamed himself Captain Cheesecake head and joined the United Federal Wrestling federation, where he's currently contending with The Crawler for the middleweight title.
Posted by Hawanja at 6:58 PM