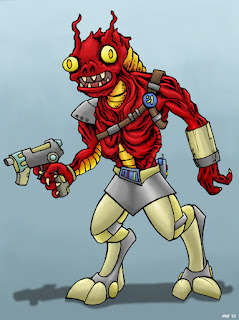 The Garbblix are a race of marauding insectoid aliens. They have no central unified government, and instead are organized into tribal collectives which often war among themselves. They often raid settlements in the surrounding star systems which have lead to several border wars. Those Garbblix which have left their native territory often can be found as pirates or mercenaries.
Posted by Hawanja at 7:41 AM