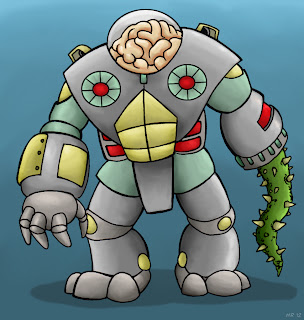 Gron is a gigantic armored beast, who acts as an enforcer for a powerful, dark, extradimenstional entity. He  began his life as a member of an average sized bipedal species, and settled into a life of mundane office work. Years of toil and experimentation with dark magics brought him to the attention of his master. Gron's body was eradicated and his vital organs implanted into a towering 200 ft. tall armored bio-suit. Gron now ravages one planet after another, forever a slave to the will of the dark.
Posted by Hawanja at 8:17 AM