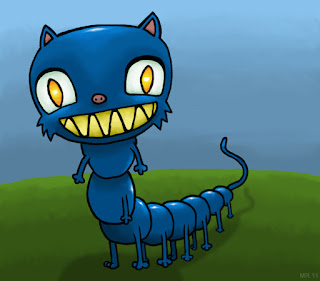 After the bankruptcy of the Cristix corporation the remaining stock of  Kittahpillars were slated to be destroyed, however several of them managed to escape into the surrounding wooded areas. Years of  cross breeding with local alley cats have created a strange offshoot of the species, dubbed "Catapedes." They are generally more feral than Kittahpillars, however many of them have been (illegally) captured and domesticated.
Posted by Hawanja at 11:49 PM