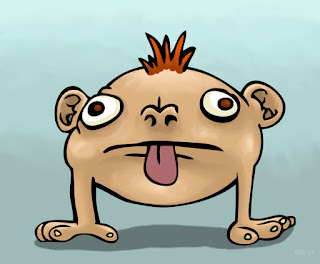 The Abbmoog are strange, two limbed creatures discovered on a far away planet with abnormally high gravity. They are have an intelligence level akin to dogs and cats, and are kept as pets by several different spacefaring species. Researchers were surprised to find the squat creatures share 99% of their DNA with modern human beings, leading to theories they are a distant evolutionary offshoot. How a population of humans could have been transplanted many light years away remains a mystery.
Posted by Hawanja at 8:18 PM