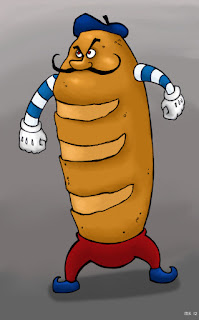 Pierre le Pain was a baker in the wonderful city of Paris who made the best baguettes in the world. One day he got into a scuffle with a group of thugs which were illegally dumping toxic chemicals into the alleys behind his shop. Pierre was left beaten and bloody, thrown into the sewers and left for dead. The strange chemicals interacted with the particles of bread on his skin and in his clothes, mutating him into his present form. Pierre vowed to use his super bread powers to protect the innocent and punish the guilty.
Posted by Hawanja at 10:25 AM