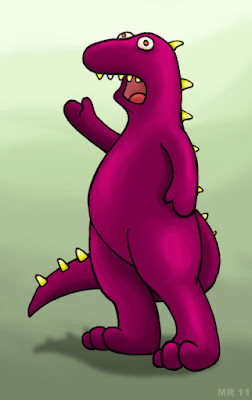 Flonkey is a big purple dinosaur who has his own kid's TV show. He originally started the show as a way of luring small children into his lair for a quick lunch, but found himself unable to actually eat the kids who showed up. He now enjoys a large media and merchandising empire based on his likeness.
Posted by Hawanja at 10:24 PM