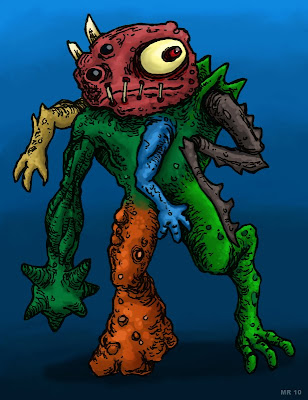 Xzephanjklix was originally a peaceful hunter on his obscure world. One day bright lights were seen over his village - slave trader ships from the Omicon syndicate. He was abducted along with his entire village and sold into slavery. Xzephanjklix spent several years in bondage, forced to work in the orbiting asteroid mines, until a freak accident left him paralyzed. Never one to waste resources, the Omicon syndicate sold him to the Intergalactic Gladiator Federation.

Xzephanjklix awoke to find himself altered beyond recognition, his body grafted with a dozen parts of other species. He now battles for survival against other gladiators in the IGF ranks. Each fighter is forced to sign a contract for one hundred battles, of which if he survives he wins the ultimate prize - his freedom.
Posted by Hawanja at 11:47 AM