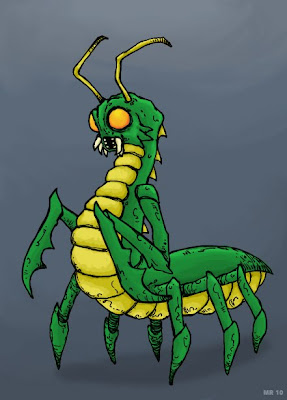 A 200 foot tall mutation due to the result from an experimental insecticide created by the Phollox corporation, the monster known as Gigamantis ravaged the cities of the American west coast for months on end. The insect's size, speed, and impenetrable exoskeleton shrugged off any attempt by the military to stop it, until the quick thinking of a pair of teenagers put a stop to the creature once and for all.

Phollox brand insecticide has since been banned.
Posted by Hawanja at 12:50 PM