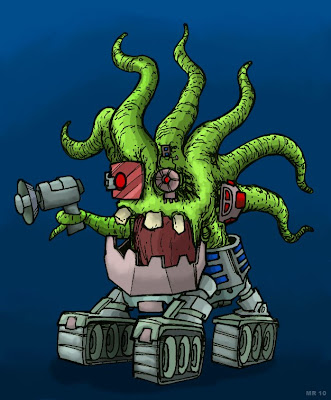 Zhanqphaliq originally came from a peaceful race of scholars and scientists. Branded a social misfit for his violent tendencies, Zhanqphaliq left his people early in his life because they were "weak." He wandered the galaxy, and made a name for himself as a gladiator and soldier for hire. Zhanqphaliq eventually found himself in the employ of the famous mercenary corps known as the Paradroid confederation. Unlike other members of his unit Zhanqphaliq had his cybernetic implants purposely implanted to enhance his abilities on the battlefield.
Posted by Hawanja at 12:16 PM