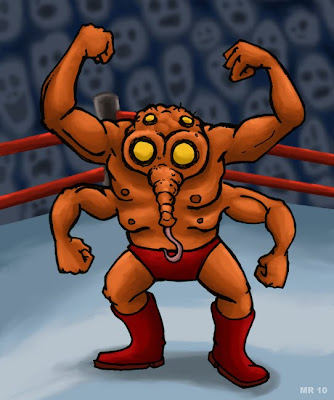 The hideous mutant and wrestling superstar known as the Crawler began life as a weak, sickly boy, often picked on by various schoolyard bullies. A freak accident with a microwave, a junebug, and a barrel of toxic waste turned him into a towering, powerful mutant. After an effective (but short) stint as a crime fighter the Crawler found his calling in the world of United Federal Wrestling, where he currently holds the worldwide middleweight championship belt.
Posted by Hawanja at 9:28 AM