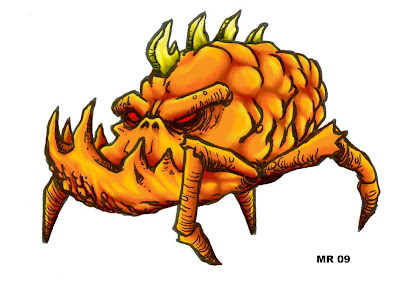 Crabmites are small, semi-intelligent predatory crab-like beings that inhabit rocky areas along the beach. They have been observed displaying complicated social behaviors, such as nominating leaders through combat, engaging in "war" with other crabmite bands, and keeping "slaves." A crabmite warren is a series of tunnels in which they live (similar to rabbit warrens) and may extend for several miles. Due to thier size they tend to avoid larger animals, however they tend to hunt in highly organized packs and have been observed attacking prey five times thier size.
Posted by Hawanja at 7:47 AM