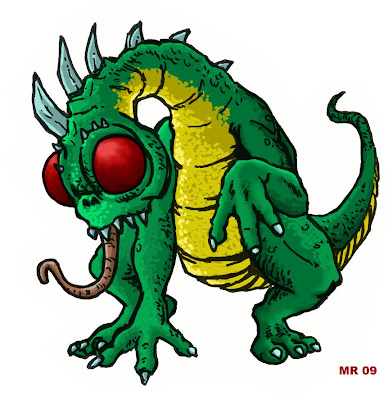 The infamous Chupacabra (Goat Sucker) grew to prominence during the late 80s after a series of cattle deaths in Puerto Rico. Unlike more traditional cattle mutilations encountered on the mainland for decades (and usually associated with UFO activity,) these animals were left largely intact, but drained of blood and with two vampire like puncture wounds. This eventually lead to near mass hysteria and army units attempting to hunt down the creature.

Sightings of the Chupacabra eventually spread to mainland Central and South America, and even to the southwestern United States. Descriptions vary, but over time a rough idea emerged of a somewhat bipedal, reptilian creature with large "Alien Grey" eyes and spines along it's back.

In 2006 the first video of a mangy, scaly, bluish dog-like creature emerged in Texas. Subsequently several animals have either been killed or found dead. Although these strange hairless animals could very well be the "real" Chupacabras, they seem a far cry from the hideous creatures that have been reported in the past.
Posted by Hawanja at 7:46 AM