Abaddon, Lord of the Pit 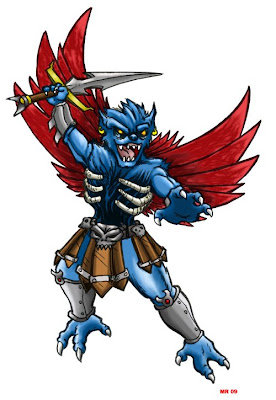 And the fifth angel sounded, and I saw a star from heaven fallen unto the earth: and there was given to him the key of the pit of the abyss.
2 And he opened the pit of the abyss; and there went up a smoke out of the pit, as the smoke of a great furnace; and the sun and the air were darkened by reason of the smoke of the pit.
3 And out of the smoke came forth locusts upon the earth; and power was given them, as the scorpions of the earth have power.
4 And it was said unto them that they should not hurt the grass of the earth, neither any green thing, neither any tree, but only such men as have not the seal of God on their foreheads.
5 And it was given them that they should not kill them, but that they should be tormented five months: and their torment was as the torment of a scorpion, when it striketh a man.
6 And in those days men shall seek death, and shall in no wise find it; and they shall desire to die, and death fleeth from them.
7 And the shapes of the locusts were like unto horses prepared for war; and upon their heads as it were crowns like unto gold, and their faces were as men's faces.
8 And they had hair as the hair of women, and their teeth were as teeth of lions.
9 And they had breastplates, as it were breastplates of iron; and the sound of their wings was as the sound of chariots, of many horses rushing to war.
10 And they have tails like unto scorpions, and stings; and in their tails is their power to hurt men five months.
11 They have over them as king the angel of the abyss: his name in Hebrew is Abaddon, and in the Greek tongue he hath the name Apollyon.

Abaddon is the fallen angel who has the "key to the pit," whereupon giant hideous locusts are released to horribly gnaw upon mankind, without actually killing them. He has been identified with Satan, with the Greek God Apollo, the Angel of Death, and (according to Jehovah's Witnesses) with Jesus Christ.