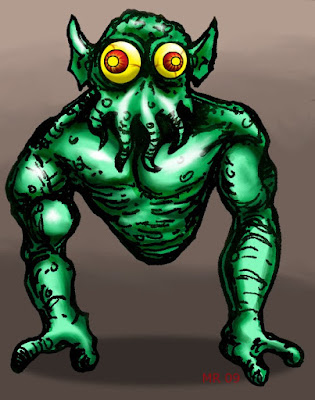 Mutated, degenerate, cave dwelling humanoids descended from the remnants of long forgotten neolithic tribes who were trapped in underground caves during the last ice age. The large bloodshot eyes are specifically adapted to seeing in low light, and also allow the creature to peer into the infrared. As the lower legs atrophied and disappeared the arms became used for locomotion. Under the chin the long facial feelers are used mostly to consume food, which consists of small rodents, mosses, lichens, lizards, and fish from underground rivers.
Posted by Hawanja at 7:19 AM