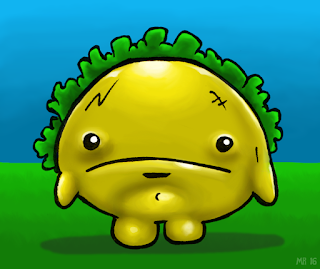 Terry Gonzales was a high school drop out who still lived with his parents at twenty five and didn't have much of a future ahead of him. He managed to find work as a cashier at the El Pollo Chistoso taco stand in downtown Los Angeles. One day a strange glowing meteor collided with the stand, fusing his molecules with a stray taco. Terry vowed to use his super taco powers to protect the weak and innocent, but mostly works as the mascot for the El Pollo Chistoso corporation.
Posted by Hawanja at 10:24 AM