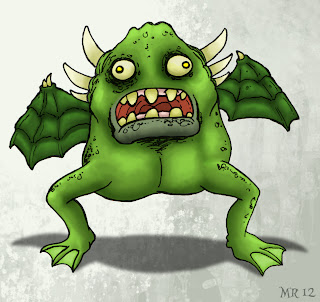 Bizarre amphibians infected with a vampire virus. Much like their distant slug counterparts, Vampire Frogs are spawned in a particular dark swamp near lands traditionally associated with legends of the undead. There are tales of ancient, giant vampire frogs which grow to the size of a man, are highly intelligent and have a the full compliment of a vampire's powers. Such ancient ones usually live in lairs deep beneath the surface, and command a following of lesser creatures to do their will.
Posted by Hawanja at 9:41 PM