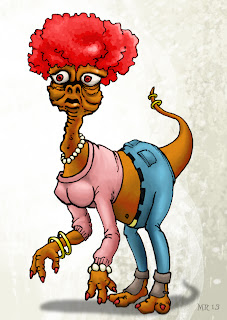 The Neboruxleans are a technologically advanced race who live on a planet in close proximity to Earth. The radio and television waves that are broadcast from Earth have heavily influenced their culture. It was a surprise at first contact for many humans to see an alien race that not only spoke in the native languages of Earth, but also had adopted similar dress and customs, focused through the lens of pop culture.
Posted by Hawanja at 8:34 AM