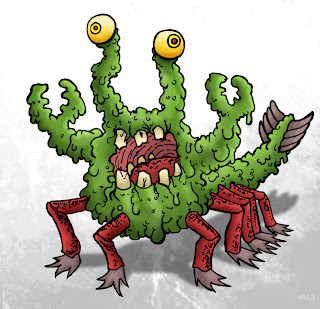 Slobsters are weird creatures descended from a school of lobsters which became trapped in a cave, deep beneath the ocean floor. In this isolated `environment the creatures turned to feeding upon the native bacteria colonies, until eventually they evolved to form a symbiotic relationship with it. The Slobsters from a slime around their bodies of the strange bacteria, which allows them a portable food source.
Posted by Hawanja at 10:59 AM